Teens to be tested

RANDOM drug testing is soon to become routine at all high schools in South Africa.
Cameron Dugmore, MEC for Education in the Western Cape, said: “Random drug testing is not in effect yet, but many high schools have been conducting drug tests with permission from learners’ parents.”
He said the new testing system would be compulsory.
Dugmore said the method of testing and date of commencement would be discussed at meetings with national education minister Naledi Pandor next month.
“Learners found to be drug users will be supported by receiving counselling,” he added.
Marcia Woolward, Grassy Park High School principal, says she has no objection to random drug testing “because drug abuse is a serious problem among the youth.
“This may be the aggressive approach to curbing drug abuse we’ve been looking for because right now only parents have the right to enforce rehabilitation.”
Jeanene Matthyse, Grassy Park High School counsellor, identifies drug abuse as a major problem in the community.
“I fully agree with the idea of random drug testing, but my hope is that things don’t end there. The learners should be given counselling and rehabilitation as a means of effectively combating the issue of drug addiction.”
According to Matthyse, blood-based drug tests are more effective and accurate than urine-based tests because “drug abusers have learnt different ways to lessen the chance of drugs being traced in their urine.”
at Tuesday, July 29, 2008 No comments: A couple of education cartoons for Maskew Miller Longman.
at Thursday, July 24, 2008 No comments: Editorial cartoon People's Post
Shooting seals
aly verbaan
SEALS spitting sinkers faster than tracer-bullets; seals hopping onto boats to snatch a snoek from the hands of a lowly fisherman; seals sinking their teeth into a sunbathing blonde. Barely believable but apparently true stories, according to the various fishermen who related them to People’s Post this week. These were in defence of allegations put to them that they or their crew were guilty of widespread killing and maiming of seals that dare to compete for the bounty of shoals of snoek that run off the Cape peninsula every year.
People's Post 22nd July 2008
at Tuesday, July 22, 2008 No comments: City to bite down on amount of pets per household
tammy petersen
ANIMAL protection organisations have questioned the feasibility of the proposed pet bylaw open to public comment which aims to control the amount of pets allowed on a property.
The bylaw, which will make it compulsory for dogs and cats to be sterilised, be fitted with tags and walkers to carry litter bags with them at all times, is open to public participation until October.
JP Smith, chairperson of the City of Cape Town’s safety and security portfolio committee, says two pets is the proposed limit of animals per household.
“However, other aspects such as the size of the erf as well as a lack of complaints from neighbours can have a specific family’s amount increased if they write a formal application to the city.”
He says the proposed bylaw, which is a combination of 10 existing bylaws aimed at animal control, will see law enforcement officers “reactively” carrying out inspections when pets cause problems in an area.
Peoples Post 15th July 2008
at Tuesday, July 15, 2008 No comments: Editorial cartoon for The People's Post
at Tuesday, July 08, 2008 No comments: 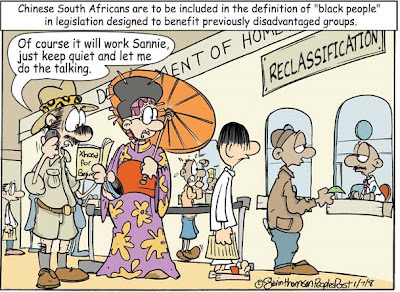 "landmark ruling that Chinese South Africans are to be included in the definition of "black people" in legislation designed to benefit previously disadvantaged groups."
at Tuesday, July 01, 2008 No comments: