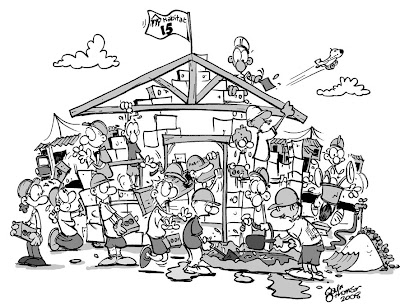 Cartoon for the St Johns Parish Profile
at Monday, December 29, 2008 No comments: 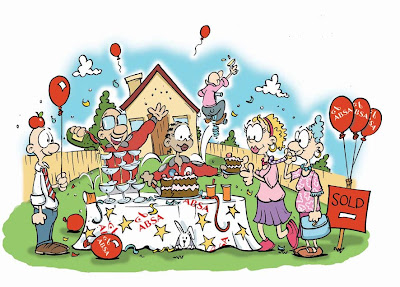 right on the nose 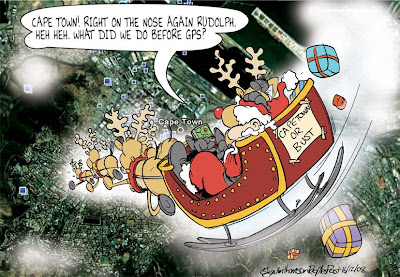 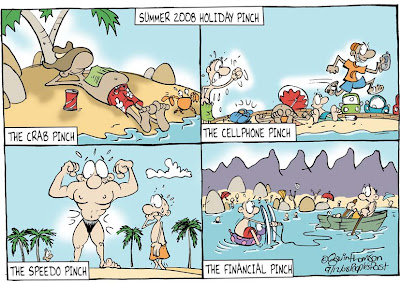 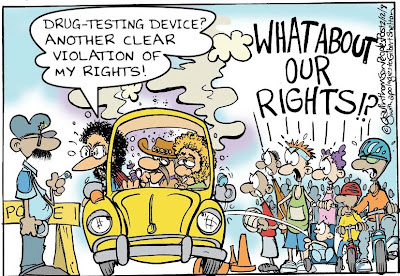 Testing device to nail drugged drivers on the spot Editorial cartoon for the People's Post
adri-ann peters
SOUTH AFRICA’s first mobile drug-testing device, which was launched last week, has been tasked with identifying drugged-up drivers abusing the roads.
The DrugAlyzer DrugWipe device, which is used internationally, was revealed to South Africans on Tuesday as a prelude to its use by the Western Cape Department of Community Safety.
Cheryl Roberts, spokesperson for Community Safety MEC Patrick McKenzie, could not confirm when exactly the department’s two drug testers, worth R25 000 each, would be put to work on regional roads.
But, at the launch event in Voortrekker Road, Salt River, McKenzie confirmed that authorities would make use of the devices at roadblocks during the department’s Safer Summer Season programme, which kicks off this month.
The drug testing device – a product of Trimega Diagnostics, a South African-based company that specialises in the procurement and development of diagnostic testing devices – will be used to determine whether or not a driver has used drugs. The instrument does this by testing a sample of the person’s saliva or sweat for the presence of various narcotic substances.
The test can be performed in less than six minutes. Should the candidate’s driving be hampered and his or her test prove positive, their blood can in future be sent for sampling, and the result presented as evidence in court.
Drugs detectable by the device include dagga, tik, cocaine, and numerous opiates.
Trimega Diagnostics, together with the department, carried out 22 research roadblocks across the country between April and November this year. Tests showed that 28% of those who took alcohol breath tests failed, and 14% of those who took drug tests also showed high blood-alcohol levels.
Of the candidates who tested positive for alcohol, 19% also tested positive for drugs, read the research report presented by the company.
Superintendent Pierre van der Riel, station commissioner of the Woodstock Police Station, highlighted drug testing as one of the challenges of policing. He said procedures currently in place rely mainly on the testimony of police officers, who must personally testify that a driver under the influence of alcohol or drugs had not been in full control of their vehicle while on the road.
Van der Riel said doing so is “not always easy”. The driver suspected of the crime would typically be taken to the nearest doctor to be tested. Van der Riel welcomed any tool that could assist officers in putting drugged drivers behind bars.
With the country heading towards the festive season, McKenzie said that hundreds of roadblocks are planned for the next few months. “We are aware of a significant number of accidents caused by drivers under the influence of alcohol, and although no official figures exist, drugged motorists are also guilty,” he said at the launch.
While the Department of Justice and the Director of Public Prosecutions work towards adopting appropriate legislation to formally incorporate the use of the drug-testing device, its use will in the meantime help the department determine the extent of drugged driving in the province, and raise awareness of the wrongs of driving under the influence of drugs.
According to a comprehensive privately-funded report prepared by Trimega Diagnostics to accompany the launch, the current National Road Traffic Act of 1996 does not permit, among other things, equipment to be used to screen for drug-use on South African roads . Another section of the act also informs that a person may not refuse a blood or breath test to determine their alcohol intake. “Unfortunately this does not apply to any other type of test, e.g. a saliva or urine test,” the report continues.
Meanwhile, the department warns that motorists found to be “visibly affected by drugs” to the detriment of their driving will in the meanwhile be prosecuted on the basis of impaired driving, Roberts said. Should the test result prove that a candidate has administered an illegal substance, but driving has not necessarily been negatively affected, the person will be engaged on the dangers of drug use so that awareness can be raised around the issue.
at Tuesday, December 02, 2008 No comments: